Last week, I had an author table at a local restaurant and at the one-day Grit City Comic Show.
Both of these events were first-time events for me.

AT THE RESTAURANT AUTHOR TABLE

The author table is an ongoing table at BBQ2U, a local restaurant whose owner supports local authors and artists by giving them space inside his restaurant to show off and sell their wares. He also raises money for various community groups, schools, and Backpacks 4 Kids, a feeding program for school kids in the area. If you are ever in Gig Harbor, Washington, I highly recommend going to BBQ2U for some really good grub and to support the generous-hearted business owner and the community.
What I expected: honestly, I didn't have super high expectations because I've had some really tough times selling books at author tables at book fairs, bookstores, and other community venues. I get nervous and my nervous laugh sometimes comes out and scares people away.
What happened: the owner, the entire work crew, and a couple of authors from The Greater Gig Harbor Literary Society all ensured I felt welcomed, cared for, and supported. They encouraged me and helped me in every way they could. The BBQ crew told customers about my books when I wasn't at the table.
The customers, well, some were super supportive and came by to either talk and buy a book, or at least chat about books, writing, and the authors of Gig Harbor. Some didn't approach but said hello and were friendly. And some ducked their heads and moved by quickly, but I get that. Honestly, I don't always stop at tables where someone is selling something either, so overall, it was a good experience.
Books sold: 10 in six days of sitting at the table.
No, this isn't a huge number, but again, honestly, I have had some really bad events where I sold 0 books so I count all 10 sales as a huge gain. Plus, I have some hope those who came and "looked" might buy a book later or stop by again. You see, the restaurant keeps a shelf of all the authors who have been there, and the books are on sale all the time. I sold two books for another author while I was there because the people I was talking to didn't read fantasy or sci-fi, so they bought historical fiction.
The owner invited me to come back in November or December to try and get some Christmas sales, and also told me the summer months are actually the best months. So, I will go back again and try again. I also appreciate the invite! 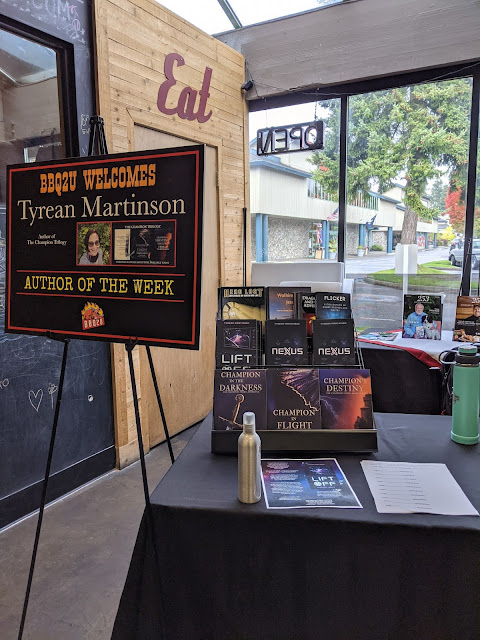 The author table at BBQ2U in Gig Harbor, Washington

AT THE GRIT CITY COMIC SHOW

At the Grit City Comic Show, I had a vendor table between a used book and comic book vendor and a huge empty space because two vendors who were supposed to be there didn't come. I wasn't as prepared as I should have been and my husband did a super-heroic job of finding me have a better table cloth (mine was too small). 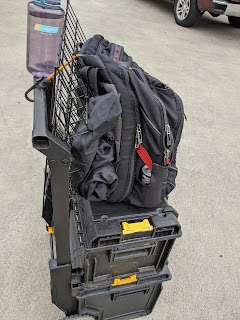 My husband cleaned out some of his tool boxes and we used them to create an easily moveable kit for my table. 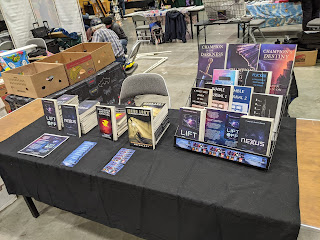 My table before my husband aka superhero searched for, found, and brought back a length of black cloth to use as a long enough table cloth.
Note: I had no backdrop and that's something I will change for next time.
The empty space next to me was a bit of a problem because people were often walking quickly by it, or looking across the aisle at other stuff.
The used book and comic book place next to me actually brought me a little business and the sellers there were friendly and kind. You can see part of their display, which wasn't finish when I took this photo, in my background.
I met three other authors, had a conversation with one and we bought each other's books, and had a good time meeting a handful of other vendors who, again, were friendly, interesting, and fun to talk to.
One thing I loved about my location is that I was near a free gaming table area hosted by Alexandria LitRPG Library at Grit City Comic Show. 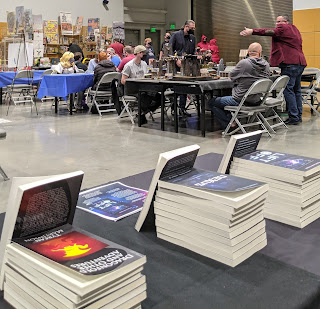 Game area across from me. 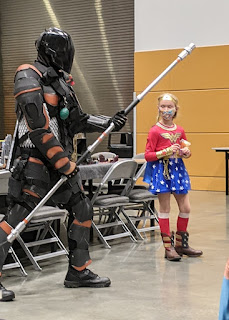 The cool cosplayers were out!
Sales total: 6 books in 1 day.
Would I have liked to sell more? Yes. But all guests and vendors had to have vaccination cards or proof of a negative test to enter. I think this may have driven the crowd numbers lower.
My only, major negative for the day was the cacophony echoing off the convention center walls and ceiling all day. This is not something I think the show organizers can really do anything about. It's the nature of indoor conventions in large spaces.
I have Meniere's disease and my ears both ring in an annoying way sometimes, and I can be a little hypersensitive to sound. For example: right now I can hear my laptop fan, the fan on my husbands' PC downstairs), my dog's snores, and the dishwasher in the other room and I'm thinking about putting on my headphones to cancel out some of the sound.
So, I have thought of three solutions to that problem for the future:
1. Take more outside breaks throughout the day so I can get away from the sound.
2. Bring noise canceling headphones and wear them for short breaks.
3. Have cloth backdrops for my booth/table area for both a better presentation and sound canceling.
I am also considering the possibility of having a sign that somehow states I have some hearing sensitivity and issues. I want to be there and I want to be friendly, but I know I need to take some breaks.
And, the best idea I have for making future cons and tables far, far better: I need to bring a buddy, or two or three.
Does anyone want to share an author table with me in the nearish future - like 2022?
Let me know. I live in the Pacific Northwest region of the US, so anywhere between Bellingham, WA in the North and Eugene, OR in the South and between Bremerton, WA in the West and Boise, Idaho in the East would be good.
Next time, I also know I would like to:
So, if you've done author tables, what else would you do or bring? Thoughts?

THE NEXUS MOVEABLE BOOK PARTY IS PARTYING ON THIS WEEK WITH THE FOLLOWING POSTS:

The Role of Food and Beverage in Fiction Writing, Part 1 at Chrys Fey's Blog

The Role of Food and Beverage in Fiction Writing, Part 2 at H.R. Sinclair's Blog

The Role of Food in Fiction Writing, Part 3 at MJ Fifield's Blog

Fave Food and Beverage in Science Fiction with Jemi Fraser 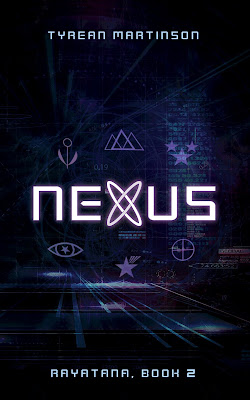 Amaya is supposed to bring peace to the galaxy. Which is tough when she’s being held for crimes against the Neutral Zone. Her imprisonment is on her own ship with her own crew. But close quarters create tension.

Honestly, her role as Rayatana is a mess.

She may never get to use her powers for anything good. Not if her teacher continues to keep secrets, and not if her powers keep harming others. Putting her mother in a coma should put her in prison, but she has a mission. She wants to bring peace to her people. She needs to become the Rayatana.

Posted by Tyrean Martinson at 10:13 AM

Those are really good ideas. Having someone with you would work for many reasons. And having a backdrop/cloth, brilliant. I can see (pardon the wording) how it would cut the sound -- but also focus attention on your table.

If I lived closer to you, I'd so be your buddy next year.

I definitely recommend smaller items to sell along side books. I've found magnets are always a good item and you can make some pretty cool bookish ones in Canva. I wonder if I should do a tutorial on my bottle cap magnets for IWSG one day. They are easy enough to make.

HR - thank you! Yes, I think the backdrops can really help.

Patricia - That would be fun! I like your ideas for magnets. And yes, I would need a tutorial. I'm not crafty...not at all. I can make glue guns into a reason to visit the urgent care.

That's great that the restaurant is so supportive and offering you more opportunities to sit at an author table. It sounds like a good idea to get some other authors to join you. Congrats on your book release!

I wish I wasn't on the opposite coast or I would join you.

Having a backdrop or standees will help with sound. We manage to build a nice cave with all of our stuff and that makes a difference.

I wish I lived close enough to join you!

I am always amazed at all the cool set ups and trinkets authors have to sell at these events. I'm very basic.

I myself would have to take an occasional break - from the crowds, noise, etc - too much stimulation - and get outside, take a few deep breaths before returning refocused and refreshed.