I hesitated to create pen names because I love my real name, but over the years, I have come to understand that some readers find it off-putting. In addition to that, I have discovered that many people I know in my regular, real world, life, don't get what I write, or understand that to truly allow the light of Christ to shine in my work, I'm going to allow some gritty, dark things based on real world problems into my fiction.

For those reasons, I have created a few different pseudonyms. One of these is TA Thorne.

Under this name, I will be publishing the Captain Wrath series. Captain Wrath was a character I created in response to a flash fiction challenge in 2011. He is an interesting character, one not quite good and not quite bad. He's basically an anti-hero, someone with a tough past, someone who wants to do right but who also struggles with a desire for revenge and some anger issues. His stories always include humor, but they often include references to abuse, human trafficking, drug and alcohol addiction, and gambling addiction. The action in his stories sometimes gets bloody, and he loves women, but his romantic scenes take place behind closed doors.

He isn't a YA hero. He's an adult who's been through horrors and has survived them with a cynical sense of humor and a shred of faith in a Creator and Savior God he doesn't completely understand.

He is my go-to character on days I wrestle with the darker parts of my own past - I was one of six children sexually assaulted by two teens who threatened to kill our parents if we told anyone. It's taken years of prayer, some therapy, and the healing experience of forgiveness to live a life of love and happiness, but sometimes I still have post-traumatic stress symptoms. Captain Wrath is an outlet for those moments.

So, with all that said, if you want to, if you think you will be okay with a little snark, a little cheese, a tiny nod toward faith, and some gritty adventures, you are welcome to check out the Captain Wrath series which will go live first for Kindle Vella, and then in book format. 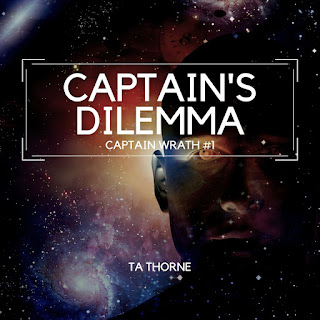 Haunted by night terrors about his sister's fate at the hands of traffickers, United Galaxy Naval Officer Ben Cranston III has been other than honorably discharged from the UGN and needs a new identity, a new career, a new way to get into the interstellar spaceways to search for those who took his sister. The United Galaxy Cruise Lines offers careers as themed characters of their ships. It seems too good to be true, but when Ben dons the mask of Captain Wrath, there's no turning back.
Captain's Dilemma: Captain Wrath #1
by TA Thorne (Author)