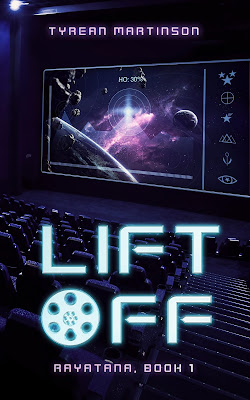 A spaceship in disguise,

An Earth girl searching for a sense of home,

And a Thousand Years’ War between alien races,

All collide on a summer afternoon.

An old movie theater welcomes Amaya in and wraps her up in the smell of popcorn and licorice. But one sunny afternoon during a matinee, the movie screen goes dark. The theater rumbles.

Amaya gets trapped in the middle of an ancient alien conflict. Angry and frightened, Amaya entangles herself in a life-changing cultural misunderstanding with Sol, a young alien who keeps omitting key information, even while they’re on the run from his enemies.

What will it take to survive a battle between alien races involved in an ancient war?

Liftoff is a fast-paced read for fans of Code 8, Guardians of the Galaxy, and Cobra Kai.

Available through Ingram Spark, Amazon, and most online retailers.
Reviews found at Bookbub, Goodreads, and Reedsy.
WHAT REVIEWERS ARE SAYING ABOUT LIFTOFF:

"So much fun! Liftoff is a fabulous introduction to a new world and series.

Amaya's life is completely disrupted when she heads to a movie with her friends. Instead of enjoying the film, she finds herself on an alien spaceship flying to a different solar system. And things only get more complicated from there!

Alien species, new technologies, a heap of expectations, family drama and a cute alien who will do anything for her change everything for Amaya.

"Amaya loves going to the movies, but one day there’s an earthquake during the matinee. At least, she thought it was an earthquake. It turns out the cinema is a spaceship and she’s stuck on it during liftoff. So begins her adventure.

This is a fast-paced story for teens. There’s plenty of adventure and excitement wrapped in an intriguing world of galactic proportions.

Amaya is headstrong and stubborn. She doesn’t trust easily, but she’ll need to learn to trust if she’s going to survive this adventure.

Sol is an alien and a cutey. He is calm and even tempered. He comes across as skilled and knowledgeable, and I liked him a lot.

Throw in some misunderstandings, space battles, alien races locked in an ancient war, and we have a great escapist mix." - ELLE CARDY, AUTHOR

"With hints of what was to come, this action packed story carries our adventurous protagonist away from our every day world. She finds herself completely out of her element, dealing with one unexpected blow after another. A fun and totally absorbing read!" - EC MURRAY, AUTHOR

"It's been a while since I had the pleasure of reading a space/alien adventure. And it lifts off (pun intended) in a movie theater, which is actually a space ship incognito.

The author, Tyrean Martinson hooked me on page 1. Fast-paced and full of adventure. Amaya is abducted, accidentally, when the movie theater/space ship was escaping from their enemies. And the journey begins...

I like the main characters, Amaya and the alien, Sol. These two have a connection that's endearing and gets stronger, and somewhat tricky, throughout the story. It's a nail-biter when the reader gets involved in a space battle, and then the suspense continues after the ship lands on a planet. Amaya and Sol flee into a strange and scenic landscape. Sol helps the baffled Amaya, but she's stronger than she appears. The couple have their hands full as strategic forces are desperately trying to capture them.

I never leave spoilers, however, there's much more intrigue surrounding Amaya, Sol, and her family. I can't wait to read the next installment." - CATHRINA CONSTANTINE, AUTHOR