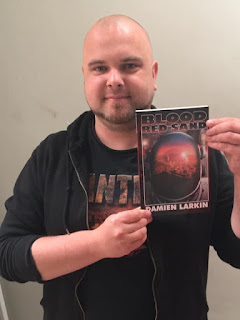 Welcome Damien Larkin to Author Insights 2021 - a post where I interview authors about their writing lives and current projects!
1. Do you have any advice for aspiring writers?
Yes, write and read as much as you can! I know it sounds a bit clichéd, but that novel won’t write itself (unfortunately). One of the biggest complaints I’ve heard in the past, is people saying they don’t have time to write. It can certainly be tough juggling a job and family commitments, but I believe that if you have time to watch TV or scroll on Twitter, then you have time to write. I’m not saying you have to dedicate every single waking moment to crafting your novel (everyone needs a break) but try not to get into the habit of making excuses. Do as much or as little as you can – every word takes you closer to your goal.
2. Tell us about yourself. (like what you do for a living, hobbies, etc..)
I work as a Planning Analyst for a major broadband and TV provider here in Ireland. It can be a tough, fast paced job but I really enjoy it. In my spare time, I love spending as much time as possible with my family – they’re my favorite people on the planet. If I’m not working or hanging with them, there’s a 99% chance I’m either writing or doing something writing related. The other 1% of the time, it’s a safe bet that I’m watching a sci-fi move or Star Trek!
3. What is your writing process? (A special place or how you outline, or do you just jump into it. Or, what you need before you sit down to write: coffee, tea, cookies)
I’m a coffee-fueled writing machine. Without coffee, nothing would get done! I fall into the pantser category of writers – I very rarely plan out what I’m going to write on paper, although I will often spend weeks/months working out the details of a story in mind. As soon as I have the main details worked out in my head, I dive straight into it. Some of my best ideas come to me while I’m writing so I just go with the flow, let the words pour out and try to make it all make sense during the editing process.
4. From start to finish, how long does it take for you to complete a novel?
It varies from project to project (often depending on how busy I am at work) but on average it takes about four and a half months (give or take). Once I get past the first 10k words of a story, it becomes real to me and I give it an official title. I find if I struggle with a WIP before reaching the 10k marker, then I haven’t figured it out or some part of it needs more work. At that point, I’ll put the project on hold until I work it out or I’ll start something new. If I cross 10k, then I know it’s real and it’s very hard for me to take my foot off the gas until I have the first draft done.
5. How did you come up with the idea for Blood Red Sand? (insert title)
Sometime after the launch of my debut novel Big Red, my publisher Diane at Dancing Lemur Press suggested doing a prequel short story for it. Throughout Big Red, some of the characters make reference to the 1954 Battle of New Berlin pitting the Allies against the Nazis to seize control of Mars. It’s mentioned a few times throughout the book, but never explored. A few Big Red fans asked about the backstory too, even prompting me to do a blog post on it. From there, the seeds took root, and I wrote a 13k word story entitled Blood Red Sand which covers the initial disastrous invasion of Mars by the Mars Expeditionary Force. My publisher read it, liked it and told me to develop it into a novel (which I did with glee) so here we are!
Author bio: Damien is an Irish science fiction author and co-founder of the British and Irish Writing Community. His debut SF novel Big Red was longlisted for the BSFA award for Best Novel in 2019. His next novel Blood Red Sand is due out 6th July 2021.
Links:
Big Red: https://www.amazon.com/Big-Red-Damien-Larkin-ebook/dp/B07NQM7W5S/
Blood Red Sand (preorder link): https://www.amazon.com/Blood-Red-Sand-Damien-Larkin/dp/1939844789/
FB : https://www.facebook.com/DamienLarkinAuthor/
Twitter : https://twitter.com/Damo_Dangerman?
IG : https://www.instagram.com/damo_danger_larkin/
Website: https://www.damienlarkinbooks.com/
Goodreads: https://www.goodreads.com/book/show/55945491-blood-red-sand 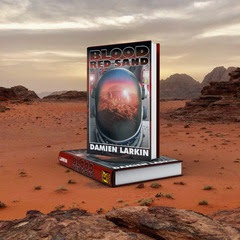 Blood Red Sand blurb:
Mars will run red with Nazi blood...
After World War Two, Sergeant McCabe knew the British army could send him anywhere. He never imagined facing down another Nazi threat on Mars.
In New Berlin colony, rivalry between Generalfeldmarschall Seidel's Wehrmacht and Reichsführer Wagner's SS threatens bloodshed. The Reichsführer will sacrifice everything to initiate the secretive Hollow Programme and realise his nightmarish future for humanity.
McCabe, Private Jenkins, and the Mars Expeditionary Force must overcome bullet, bomb, and bayonet to destroy the Third Reich. While Jenkins fights to stay alive, McCabe forms an uneasy alliance with MAJESTIC-12 operatives known as the Black Visors.
Will this be the final battle of World War Two or the first confrontation in an interstellar war? 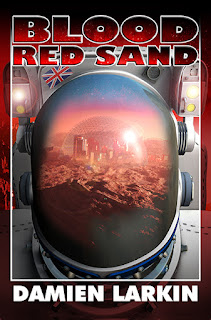 Thanks for featuring Damien and his new book. I'm really glad he tackled that prequel.

Love your enthusiasm for diving right into your next project once you have some details figured out! I began writing as a pantser. Totally. I then morphed into a major planner. But life happened, and I've had to take a break from my scheduled writing time/arena. Who knows what I'll be once I start up again. LOL

Great to meet you, Damien. Congrats on the book!

Damien is a talented author and an all-around great guy, so I'm happy to feature him!

SA - Thanks for stopping by!

Blood Red Sand is a fun ride so far!
I plan things for months in my head but then spend a couple more months detailing an outline. My stories would wander into the desert and never return otherwise.

Nice to meet you, Damien. I love that your family is your hobby. Me, too, and it's wonderful. Your book looks great. Thanks to Elon Musk wanting to colonize Mars (in 10 years), I'm excited again about the red planet.

@S.A Plotter/Pantser both have pros and cons, so whatever works best! All the best with your next project. I'm rooting for you!

@Tyrean Thanks so much for having me on. Much appreciated as always!

@Alex Thanks so much for checking it out!

@Jacqui A pleasure to meet you too! Yes, family first. They're definitely my favorite people on the planet!

Great interview, Tyrean! My favorite sentence was, "I love spending as much time as possible with my family – they’re my favorite people on the planet." I enjoyed everything else in the interview, but this told me the most important thing about Damien: His heart is in the right place.

I'm so impressed that Damien can write a first draft in months. Right now it's taking me a year or more. I totally agree with his advice to find time to write if you want to get a manuscript finished. Congrats on his book release!

It's great when a quest for more backstory leads to another story altogether:)

@Fundy Thank you. I really am blessed with them!

@Natalie I tend to work well if I have a deadline in place, especially if it's one I set myself. Circumstances are different for everyone, so take all the time you need to do the first draft. It'll be worth it when you reach the end!

@Mark Cheers! Wasn't expecting it to be anything more than a short story, so made my year when I got to develop it further!