Skydiving at 49, and More Thoughts on Kindle Vella

Imagine your first ride in a small airplane is at two months of age. Countless more follow, so that your earliest memory of flying is with your dad and your mom in a two-seater Ercoupe flying to a "fly-in" - also known as an "air show" for spectators, although fly-ins don't have to include much for spectators since they are/were a way for pilots to gather together to celebrate their planes, their experiences, and to have a community gathering including potluck meals and dances with live bands held in hangars at smaller air fields. 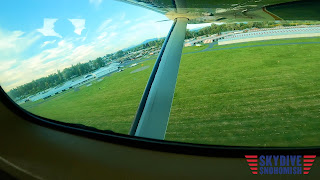 Flying is a part of your life. You can't imagine not flying with your dad, and you get exceedingly grumpy when your mom makes you drive to a few fly-ins after she got scared during a flight with exceptionally rough turbulence (which you thought was fun). At every fly-in, pilots take to the skies to show off their planes. At the bigger fly-ins, you get to see big spectacles with fighter pilots, trick pilots, and skydivers. 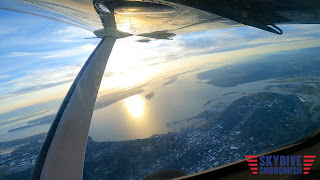 You love all of it. You plan to do all of it someday, including those beautiful skydiving formations with those gorgeous parachutes spiraling through the sky.

But, life happens (this could be a long story if I detailed all of it), and your planned "someday" of going skydiving doesn't happen. 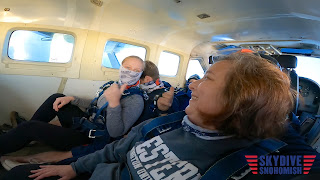 Until your own nineteen-year-old daughter tells you she plans on going skydiving. She's done some research. You help her and ask her if you can go with her. She says yes. You set a date. It feels a little surreal. You don't tell anyone outside of your immediate family because you don't anyone to talk you out of it. You're 49, not in the best shape, but you know if you wait for "someday" it isn't going to come.

You wait. The day of the skydive, you read the guidelines at least four times, you can't eat much, you know you are already in fear mode, but you keep telling yourself it is going to be awesome. 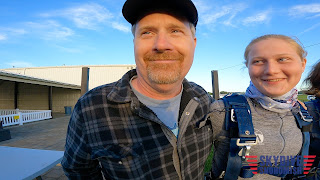 You suit up. You realize you might not be as confident as you thought after the training video and training on the ground when your legs shake while you're stepping into the harness and your tandem instructor is cinching it onto you, giving you a pep talk the entire time. 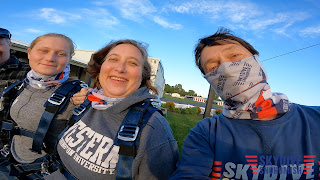 It's time to get on the plane. You realize you are terrified, but you are trying to smile and laugh your way through it.

Your instructor asks you, "are you sure?" 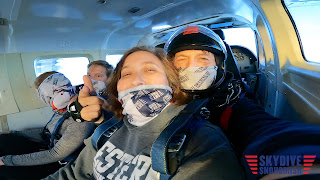 You shout, "Yes. I'm doing this!" while grinning and hysterically laughing.

The plane goes up. You can see Mt. Rainier, Mt. Bachelor, Mt. Hood, the San Juan Islands, the North Cascades, Seattle, and it's just as glorious to fly in a small aircraft as you remember.

Four solo jumpers climb out and cling to the aircraft in preparation for a formation jump. Your brain feels stuck in awe mode. They jump.

Your instructor and your daughter's instructor scoots you forward. She goes. 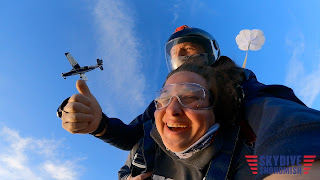 (The white chute slows tandem jumpers from 180mph to 120mph)

The panic is in your throat again, but you scoot to the edge of the plane, tuck your feet under and lean your head back onto your instructor's shoulder, and you're out of the plane before you have a chance to second guess anything. The air is loud, in your face, you aren't even sure which way is up for ten seconds. You take the arch position you've been taught, and the instructor tries to give you all the hand signals to do cool things for the camera, but you're pretty well stuck shouting "woohoo" through an open mouth, although they taught you to exhale and inhale through your teeth, with an emphasis on remembering to exhale so you remember to breathe in afterward. You remember the exhale. The teeth part not so much. 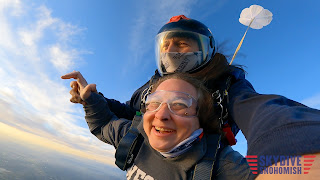 The sixty second free fall you signed up for feels like ten minutes. You're terrified, elated, amazed, terrified, joyful, terrified, thankful the instructor has over 22,000 jumps under his belt, repeat... 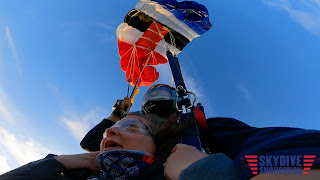 The instructor opens the chute, and while most people describe this part as glorious, you realize just how much farther you have to go until you get to the ground. Sure, you've slowed from 120 to 20 mph, but the fall looks never-ending to you. It's beautiful, sure. The instructor is trying to help you smile and laugh, but the terror is still strong. You fight it. Keep shouting "woohoo." 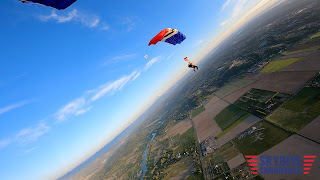 The instructor brings you closer to your daughter and you see how full of joy she is. It fills you with gladness, and you attempt to be super brave. 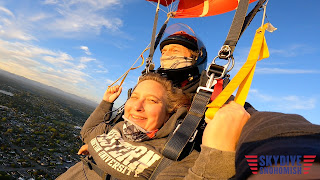 As you near the ground, fear hits again, but you lift your feet, and suddenly, you're down, on the ground. Relief. 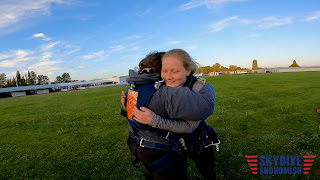 And, although you want to go sit somewhere until your legs start shaking, you hug your kid, and thank your instructor. You think about signing up again - next time, you hope you can kick fear to the curb.

The book I decided to use and why: 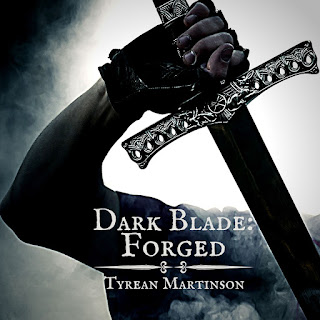 Dark Blade: Forged is the first book in an unorthodox trilogy about the life of Dan Torren aka Dantor from The Champion Trilogy.
I chose it because:
1. Serials with tie-ins to other, already published series work better for authors because they might already have a readership, and they can bring readers to the already published series.
2. This book has been in my files for a long while. It isn't finished completely, but it's close. I'm not giving readers the option to vote on the ending as some writers are with their KV titles.
3. The book is part of an unorthodox trilogy that time jumps through the life of Dan Torren, from his late teens/early twenties through his fifties. (Before, during, and after The Champion Trilogy.)
4. Other Champion Trilogy characters in the Dark Blade Trilogy will include (but are not limited to): Farrald, Alexandros, Perren, Kalidess, and more...
5. I finally understand the token system for Kindle Vella and I think it might work. The number of tokens it takes to unlock each episode is based on word count. It's still not pro-pay, but it is similar to how much an author is paid per book in the Kindle store. If you normally make $2.00+ per book, that's about how much you'll make if readers unlock every chapter of a Kindle Vella title.
It is still taking a risk, but since I have a bunch of novels, novel starts, and stories in my files, I decided to try it with one I feel pretty confident about. Plus, by releasing two episodes a month, planning for 40+ episodes, I have plenty of time to revise and finish the rest of the episodes. Plus, at any time, I can unpublish the whole thing, take it back, and re-release it in another format.
Episodes will start releasing in June, but I am not sure when Kindle Vella will truly go live. It's in the beta phase now.

Originally, I planned to expand on my "Story Addict" universe, but that was looking like way too much new-writing work when I have other projects I'm already in a long-term work relationship with, including Resonance: The Rayatana, Book 3.

Posted by Tyrean Martinson at 6:30 AM

Wow! (In regards to the skydiving and the KV). I am impressed with your experience. I cannot say I am afraid of jumping out of a plane, but I think that is because I have never tried it. I do not like the sensation of falling, I barely get on a swing at the park, so that is probably not for me. Thanks for sharing about Vella, too. This is intriguing. I hope it goes well for you.

Everything you described is why I would never jump out of a plane. But glad you did it and pictures to prove it.

Steph - I am not afraid of planes, but the skydive itself is amazing and terrifying. Thanks!

You are more adventurous than I am. I am not going skydiving.

You are a brave woman. I feel bold getting in a roller coaster!

I have been out of the loop for so long that I had not even heard of Kindle Vella. Interesting...

Mary - I had been planning on it for so long, it was time. To each their own adventure.

Elizabeth - maybe, if brave is just doing it anyway, even with fear.

And the KV thing snuck up on me, but I'm going for it anyway.

Wow! I'm so impressed. It's something I'd love to do, but I'm ridiculously petrified of heights, so I never will :-(

Hi Tyrean - I'm so pleased you did it ... congratulations and a very well described jump - loved reading it. Your Kindle Vella 'experiment' sounds really interesting ... I hope it works out for you ... I look forward to further information as it progresses - cheers and congratulations again! Hilary

Whoohoo is right! I am thoroughly impressed by your bravery and guts. Good for you! :)

That is awesome! Thank you for sharing your jump with us and in such wonderful detail. One day, I might get a chance to do it. Good luck with Kindle Vella. I'm very curious to see how it works for you.

What a cool experience! Woo Hoo is right! I don't think I would have remembered ANYTHING the instructor had told me.

Best of luck with the Vella experiment. I'm curious to hear about your experience with it.

I'm glad you were finally able to do it. It looks like both your and your daughter had a great time.

Very interesting on the Vella. I hope you tell us more as you go. I'm interested in hearing all the details. And yeah, you figured out the token thing, which is still gobbledygook to me. :)

That's awesome you went sky diving. I sorta want to try it, but also not really. Like, I'm sure it will be an amazing experience, but I'm not sure that's something I care enough to want to go do. There are other things on my bucket list I'd like to get to first.