An Interview with Fantasy Author Elle Cardy to Celebrate Well of Ash and the Liftoff Blog Book Tour Continues! 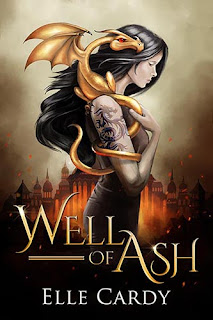 Well of Ash by Elle Cardy

If the whispers call your name, run!

Seventeen-year-old Ashina has more in common with an untamed fire lizard than the people who are supposed to be her new family. After running away, she’s drawn to the city’s mysterious Great Well. No one knows who built them across the world or why. To linger near makes the skin crawl and the mind drift in nightmares. And yet this one calls to Ash in whispers that pull her closer.

Despite the warnings from a handsome stranger with gorgeous eyes, Ash searches for answers in dangerous places. Soon she’s caught in a tangle of peculiar events she can’t explain or escape. When both her sanity and life are threatened, she realizes she has more to lose than she thought. Ash must find the answers before she loses everything she holds dear.

If you like dragons, magic, and a fierce heroine with a wounded heart, then you’ll love Well of Ash, a YA Fantasy novella by Elle Cardy. Jump in today to unravel the secrets.

Available now as an ebook and paperback on Amazon.

OR, for a limited time, pick up a free copy when you join Elle’s VIP newsletter club.

Thanks, Tyrean for having me. I’ll dive right into the interview questions:

1. Tell us about yourself. (like what you do for a living, hobbies, etc.)

I used to create art and do 3D animation for a living, but now I write full time. Best job in the world! My hobbies include photography, anything creative, and eating chocolate—that’s a hobby, right? I’m also a full-time geek and part-time gamer. I grew up in Sydney and moved north to sub-tropical Brisbane four years ago. I’m still not used to shops opening late at 9 or 10am, but it has forced me to slow down and chill out.

2. What is your writing process? (A special place or how you outline, or do you just jump into it. Or, what you need before you sit down to write: coffee, tea, cookies)

This is a difficult question to nail down because each book has been different. Wielder’s Prize, my debut YA fantasy, was halfway written without an outline and I typed it directly onto my laptop as I sat on the couch. I got to a point where I needed to map out the story on a whiteboard and outline the rest to pull all the loose threads together. Once I started outlining, I loved it. My next few books were thoroughly outlined after that, but I handwrite all my first drafts now. Occasionally I’ll still write by the seat of my pants. It’s fun.

3. From start to finish, how long does it take for you to complete a novel?

Another tricky question. It depends on what is happening in my life. If I’m able to focus, then the book gets written super fast. The problem is the editing stage. That takes longer. Much longer. During a pandemic, focus is a rare commodity. So, Well of Ash, which was meant to be a quick rewrite, turned into a three-month project.

The first book I ever wrote took nine years. I’m currently working on rewriting it for publication. Wielder’s Prize took six months then I shelved it, picked it up years later and fixed it for publication, which took another year. Wielder’s Curse took three years, but there was a lot going on in my life then. Wielder’s Fire took about a year, probably less. I think I can write a full-length book from first word to publication in six months, but I want to do it faster--without taking shortcuts, of course.

4. How did you come up with the idea for the unique world you’ve created in Well of Ash?

Well of Ash started as a completely different genre. It was traditionally published in an anthology as an urban fantasy novelette for adults called Birthright. I’d written it specifically for the anthology with a picture prompt of a girl in a red cloak standing in a snowy forest, looking up at a castle.

When I got the rights back, I let it languish. Now that I’m a YA epic fantasy writer, this adult urban fantasy had no place. But I loved the basis of the story. The market just needed shifting. So I changed the main character from a twenty-nine-year-old to a sixteen-year-old. I also changed the setting from Florida to a fantasy realm. That’s when the city of Prudentia was born.

I’ve written a lot of realms based in medieval times or seventeenth/eighteenth century technology. I wanted something different. After research, I decided I liked the Romanesque architecture best. I then meshed Roman(ish) with nineteenth century tech.

The next thing I did was add dragons. I’ve always wanted to write a story with dragons. They are my favourite fantasy creatures. Well of Ash got a brief outline. The funny thing was, once I started writing, I had to throw out most of the original story. The base is still there but the rest is completely different. So much for a quick project. But the story insisted.

5. Do you have any advice for aspiring writers?

Where to find Elle Cardy:

Well, who doesn't like dragons?
My stories have all taken different time lengths to write. As you said, depends on what's going on in life.

That's great that you learned how to outline. I wish I could because I need help writing my first draft faster.

Outlining sounds like a way to tie up loose ends and get it right. Besides the obvious like show dont tell and using the senses etc catching bugs in the first draft is the way to go.

Great interview! I'm another dragon fan - I fell in love with them when reading (devouring?) the PERN series by Anne McCaffrey :)

Thanks for having me, Tyrean.

Natalie, Think of outlining as writing a super brief, super messy first draft. Leave out dialogue (unless you have something specific you want to include), leave out description, leave out real sentences ;) Too many first drafts slow down because we're busy worrying about the words and the prettiness.

Spacer Guy, Yep, cleaning up the mess in the first draft is best for the editing stage.

Jemi, oh my gosh, I love the PERN series!!

Eating chocolate is for certain a hobby! Best of luck on the new book.

Elizabeth, Thanks, and I'm glad you agree re chocolate.

good interview and interesting premise from this author. Sounds like a fun escapist read