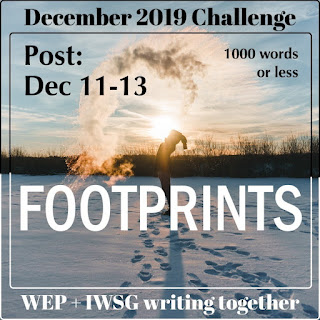 I love WEP, but I haven't participated in a bit. I hit a fizzle moment with Captain Wrath, so I won't be returning to that story cycle at the moment, but this prompt just kept speaking to me. I tried a few different things for it and wasn't really satisfied.

I'm still not satisfied, but here is an attempt at a poetic retelling of King Wenceslas (who was actually a very young king murdered by his brother in his twenties - despite all the depictions of him as an old, St. Nicholas figure).
At 449 words:

Footprints in the Snow

In a land far away and long ago,
a man followed footprints in the snow:

By his cozy hearth window, he had seen
A family laboring in the harsh cold
Bringing wood in stacks tall and clean
To Noble house hearths and stoves.

As the day waned and darkness fell,
The wood-cutter family walked home.
Their arms were empty, but they rang a bell,
Singing Christmas carols to praise the Son.

The King marveled at their joy so replete.
In his wondering he gazed at his empty luxury,
And with a sudden shout, he leapt to his feet.
With a hurried dash, he called out to me.

And together, we packed a full leftover feast,
including candles, dishware, presents, and all
For a celebration fit for Wise Kings from the East.
Then I followed him out into the cold snow fall.

We followed the family into the night.
Following deep footprints in the snow.
My young king laughed with joy and might
He hardly seemed to feel the freezing cold.

His purpose clear as he knocked on their door.
They answered but bowed exceedingly low.
But instead, he knelt down on their dirt floor,
Presenting himself as their servant now.

My king served them every morsel sweet,
He even cleaned every spoon and dish.
No one, not even I, could stop his feet.
As he danced about, as was his wish.

His song and laughter rang through the dark
and in the early morning, as the family slept,
My king and I, we woke with the morning lark
To leave the presents on the hearth he'd swept.

Back in his castle and his royal-filled life,
Nothing seemed to sate the Nobles greed.
My King had to deal with much Noble strife.
But they caught him looking to his servants' need.

Time passed, plots made, the passing of a year.
As winter's chill grew in the castle yard,
My king went out to pray with his brother dear.
But his brother's heart had become tarred.

The deed was done, my king was brought low
In bloody, muddy footprints in the snow.

The nobles wanted a puppet on the throne,
But the truth pierces the darkest of hearts,
So the light has ever, ever shone,
and the king's brother fell to love's darts.

He repented his sin, his murderous deed.
From that day forward, he ruled as his brother,
And now, with my help he has decreed,
On Christmas, we give to one another.

No one is to live in greed,
but all are to give to those in need.

For once, on a chill winter's night long ago,
My King followed footsteps in the snow.

Posted by Tyrean Martinson at 3:30 PM

Beautiful! What a lovely retelling - the joy of giving and the darkness of greed shine through.
Wishing you and yours all the best for Christmas and 2020!!

Wonderful, Tyrean! What a beautiful story.

A beautiful yet sad tale wondrously told. Thank you, Tyrean. May Christmas bring miracles your way. :-)

This is wonderful! I love how you used poetry to tell this captivating tale! It flows well and fit the theme perfectly. Well done!

A lovely poetic representation of the spirit of Christmas. If only greed was as easily conquered in real life...

That is beautiful. What a wonderful way to tell the story.

Echoing everyone else.
This is beautiful, and a tribute to the true spirit of Christmas (which I often feel has been buried).
Thank you.

I loved this. Such a clever idea, to retell in poetic form. I did a Wenceslas retelling several years ago; it's a great story to use, I think. But I didn't know he died as a young king. Thanks for the titbit.

Well told and beautifully written. A sad tale of joy and murder. A reflection of life?

Have a very Merry Christmas and a very creative New Year!

Tyrean, first of all, thank you for the prompt which is bringing forth a variation of wonderful stories. I'm always up for a good retelling, and I love this retelling of the King Wenceslas story. I surmised he was an old guy and thank you for disabusing me of that. Your poem certainly keeps to the truth of 'good king'. Such a heartwarming story in many ways, but disturbing in others. It was a brutal time.

Thank you for the times you participated in WEP this year. I hope you make time to peek at our Challenges 2020 page on our website. We have some awesome prompts prepared.

Hi Tyrean - I knew his story ... but had never really thought of his age ... just that he wasn't allowed to live out his time as a just king. Here you've brought the re-telling to light and with that extra poetic mix and reminder that we all need to be kind and caring at this time of year.

I diidn't know the story and was captivated by your delivery of it. 'The poem reminds me so much of Charles Dickens' Christmas Carol but of course in Dickens' book Mr. Scrooge changed completely.


Thank you so much for sharing.
Have a Merry Christmas and a great crossover into 2020.

Thank you Tyrian for sharing this lovely Christmas poem. I loved your snug and emotional tale. Very fitting for the season and the times.
Well done and welcome back to WEP Challenge, as a participant ... on your own prompt.
Merry Christmas writing and happy holidays with your loved ones.

Like some of the others, I didn't know the King Wenceslas story. The carol was one of my late father's favorites. Thank you for the educational poem!

I loved how you wove the story in your poem.

This is fantastic!!! Telling a story in poetic form is not easy, and you did an amazing job here. If this is the true lore behind Santa Clause, it too is fantastic.

I've read it over a couple times now and each time I love it. As someone who writes tons and tons of poetry, I know that not-quite-there-yet feeling well, especially when you'r trying to keep to a beat or rhyming scheme. Keep going until you're satisfied. It really is a wonderful piece.

I'm glad you found time to enter your story this month. An uplifting, rhyming tale!

Neat retelling of the story! - particularly appreciated the poetry form. Very appropriate tale for the season.

Wish you a Merry Christmas and a happy New Year 2020.

Thank you, all!!!
Denise - I forgot that I came up with this theme idea - which is kind of ironic, really.

Thanks for the theme, Tyrean. Interesting fact about Wenceslas - didn't know it only one of my favourite carols. Well-crafted take on the theme and the King. 'Empty luxury' rang so true - as did 'leftover feast'. Your word and phrase choice is excellent to bring the telling alive from the retainer's POV. The ending with the brother transformed was perfect, and that last line was sublime. Using the King for the Son in such a way is as ancient as Anglo-Saxon poetry - they doubled-up on Lord.