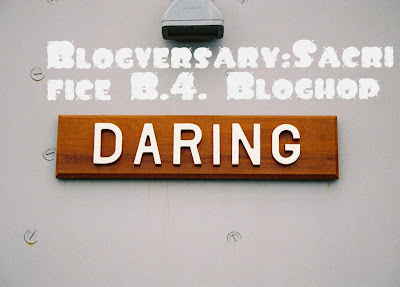 As many of you know, I am learning as I go when it comes to blogging. I've made numerous technical errors over the years and I still do . . . sometimes more than one in a week. Yesterday was one of those days, and for some reason while attempting to sign up for this blog hop, I couldn't get the linky list to work for me. I'm not sure why, but this is my unofficial, non-linkied addition to QueendSheena's Sacrifice Blog Hop.

Summary: Shari, a lonely young girl from the Edge clan, plans to sacrifice herself in the place of her friend. As soon as she jumps from the cliff edge, everything goes wrong. The Night Storms save her, and they begin to teach her their ways. Everything she thought she knew is wrong, and her sacrifice has just begun.


Shari wasn't the chosen one. She didn't have to be at the cliffs at dawn. Not like her best friend Kyrie did. But she couldn't let Kyrie die. Kyrie had a family, and a boyfriend. Vibrant, and full of hope, Kyrie had held up their village during the Longest Night when the Night Storms had taken half of their cattle and some of their strongest warriors.

Shari didn't have anything to lose, and she wouldn't be missed by anyone, other than Kyrie. That's why she had to break the law, and sacrifice herself before Kryie could reach the cliffs.

She had snuck out of the orphan house in the middle of the night, dressed warmly against the freeze, and crept her way through the silent village streets. Skirting around the Protectors had been easier than she expected, but she supposed that they were meant to keep the Night Storms out, not keep people in.

At the cliffs she waited until the earliest streaks of light stretched across the sky. She could hear the official procession coming through the village, and she knew she had to time this just right. They had to see her jump, so they would know that the sacrifice had been made. Kyrie would be safe then.

When the procession drew nearer, Shari could just make out the faces of those in the front line. The village headman, chief of the Edge Clan, Ghanto Trevayn, had a wrinkled brow, and a sour tilt to his mouth. Leaning heavily on his staff, he kept glancing at Kyrie and the Protectors that walked with them. He didn't look too happy about the choice of sacrifice either. No one could be, except perhaps, the Protectors. The Protector's faces were almost identical and without expression. They were taller than the Edge clan by at least an arm length in height, and their black armor melded into the darkness so that their faces appeared to float in the dimness.


Kryie held the red hood of the Sacrifice robe over her head, but Shari could just see the firm set of her lips, and the tightness in her cheeks.


They had come close enough, Shari realized. She stepped out of her hiding place by the jumble of rocks by the Sacrifice platform. Her heart pounded wildly in her chest, and her mouth was dry. Somehow, she manged to croak out her final words.


They didn't appear to hear her.


So, she sucked in air, and shouted out, "This Sacrifice is not needed. I volunteer as Sacrifice in her place."


Kyrie whipped off her hood, and cried, "No."


The Protectors stepped forward, pulling their bows off their shoulders.


She didn't have time to say goodbye.


Shari turned on her heel, and leapt out into the rays of dawn that lit up the canyon below her.


She screamed, and flailed in the emptiness, feeling the wind pressing up all around her.


Suddenly, a dark shape flew beneath her, and she landed in a heap on the back of Night Storm.


She wanted to push it away, and push herself off into the abyss, but she found herself clutching at its feathers.


Ok, now that I wrote that (just now), I want to write that story out myself . . .hmm. So if I don't win the blog hop, I'm ok with that. BTW the Night Storms are giant owl-people hybrids.
Posted by Tyrean Martinson at 6:10 AM

Email ThisBlogThis!Share to TwitterShare to FacebookShare to Pinterest
Labels: At the Edge, Sacrifice Blog Hop

Yeah, now I want to know what happens next!

Alex - Thanks! This is the bad part for me when I start with a simple writing prompt, and then realize I have a story, and then wonder when I'm going to have time to pursue it.

I couldn't get it to work either, so I am going to do it like you did...an unofficial entry.
Best of luck wise contender!

Elizabeth - best of luck to you too!

I feel like I'm technically challenged most of the time. I'm surprised I can get my blog to do what I want at all.

I enjoyed the snippet from your story. It makes me want to read more. What era is this set in? Prehistoric times? Or more recent?

I want to know what happens next, too.

I'm technically challenged, too. Last week or the week before my website crashed. Gasp! Thank goodness my brother is my webmaster and could fix it.

msmariah - glad to hear I'm not the only one. I didn't really have a firm idea on the setting until after I started writing - I simply "pantsed" this beginning section. However, now that I've thought about it a bit - I would say that it's firmly post-apocalyptic, or on another world. The people live in clans and villages, but are guarded/kept in place by the Protectors, and live in fear of the Night Storms.

M Pax - Good to know I managed to create a good hook! I'm sorry about your website.
BTW - I plan on sending you something tonight about the Hobbit Fest.

I have three words for you:
More. Now. Please?