Aramatir is the fictional world of The Champion Trilogy.

The Champion Trilogy delves into a world where faith, or lack of it, determines the destiny of Clara, a sword-wielding heroine in this action-adventure fantasy that crosses from one kingdom to the next by ship, land, and Griffin flight. Evil villains and mercenaries face off against allies from various lands. Multiple viewpoint characters share the story, but the focus returns to Clara, the new Champion, whose faith or doubt could change the course of history. 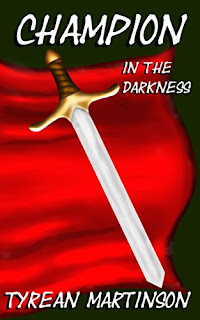 Champion in the Darkness
Clara is younger than most trainees, but she is ready to hold a Sword Master's blade. While visions and ancient prophecies stand in her way, they also offer a destiny unlike any other. Clara is aided by a haunted mentor, Stelia, whose knowledge of their enemy Kalidess is both a bane and a blessing. As evil threatens their land, Clara and Stelia must find the strength to overcome the darkness!Champion in the Darkness is YA Christian Fantasy. 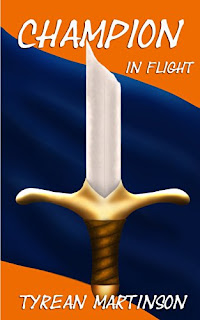 Champion in Flight
A year after she won the battle for Septily, Clara feels trapped in Skycliff by the Allied Council. As the last pieces of information about the Healing Caves fall into place, Clara is attacked by an assassin. Covert Drinaii mercenaries and the Council aren’t going to stop Clara from her quest to heal her broken blade. As Champion of Aramatir, she must act.
Meanwhile, in the joint kingdoms of Rrysorria and Wylandria, the youngest and still cursed swan prince despairs of ever being whole again. In a moment of anger and desperation, Liam discovers a blood link between him and a dark sorceress.Clara won the battle for Septily, but her battle isn’t over. 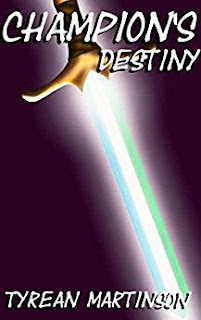 Champion's Destiny
The BattleMay Be LostBecause of a Family SecretWith distracting attention from a former swan prince and her mentors both in harm's way, will Clara be able to trust her team with her family secret as they race to fight the Dark Sisterhood on their terms?
Start the Adventure Today!
Alibris
AmazonUS      AmazonCanada     Amazon Australia    AmazonUK     Barnes and Noble    Kobo     Overdrive  Smashwords

WHAT READERS ARE SAYING ABOUT THE SERIES:

"There was so much that I loved about “Champion in the Darkness” including its well-paced plot, inspiring stories of redemption, interesting characters, and fantastical creatures. But what I loved the most about this book is that it centers on Clara, a teen-aged girl who receives a calling to become her people's champion. In the process she experiences incredible personal loss and struggles with her own faith, yet continues to be the strong hero that her people need. I loved the fact that men and women are both sword-masters in this society and that the fact that the people's champion is a woman is accepted without question. It's great to see books with strong female characters, especially YA books.

The other thing that I really loved about this book was its rich world-building. The author has created a vivid setting which really came to life and enhanced the story. I particularly enjoyed the nautical scenes and battles that took place on board Clara's ship. I almost felt as though I was there in person, although I'm glad I wasn't – there are some scary and truly evil monsters lurking in those particular waters.

This was a great read and I'm looking forward to the next book in the series." - ELLEN JACOBSEN, AUTHOR

"'Champion in the Darkness' follows fifteen year-old Clara, who's preparing for her final examinations to become a master swordswoman. When she goes to meet with longtime mentor Dantor, Clara is told she's destined to become the Champion, a fabled hero who arises in a time of need. Confused by this claim, Clara isn't sure she's ready to be a hero. She's still a kid, right?

Whether Clara is ready or not, the evil Kalidess has wormed her way into Septily's court through the king. Clara must rise to battle Kalidess and the Dark Sisterhood, or watch the kingdom of Septily and its people fall under the powers of darkness. Clara questions her faith, her strength, and her destiny as she fights to do what is right.

What I liked about this book:

I liked Clara and enjoyed seeing her growth, seeing how she handles her crises of faith and finds the strength to keep going. But I *loved* how well the stories of the minor characters were carried through the novel. One of Clara's mentors, Stelia, has a great redemption/forgiveness storyline as she learns to forgive herself for once being part of Kalidess's army. Stelia is strong on the outside, but carries a lot of doubt and uncertainty within. The other minor characters were well considered and helped to create a rounded story.

'Champion in the Darkness' is YA fantasy/Christian fiction, and while the religious side was evident, it never overwhelmed the story. I appreciated how Martinson not only showed people displaying faith when times were easy, but how she explored loss of faith when times were hard, and how different people coped with doubt, anger, and fear." - A. MCCALL, AUTHOR

"This story is so inspiring. There were several times that I got the chills reading this book. It has so many deep and strong character that are easy to fall in love with. I was so emotionally involved with them that they seemed real...I couldn't help wanting to cry when something bad happened to them or wanting to cheer when they triumphed.

The message of salvation and second chances was weaved throughout the entire book, always there but never preachy. I loved getting to read as one of the characters worked through changing from the dark to the light, struggling with her guilt but then finally learning to put her faith in God. There is always a second chance, always people willing to accept us and take us in. I think this is a message that we all need to hear a lot more often and I appreciate the way the author sprinkled it throughout this amazing story.

And as odd as this is to say, I was very impressed with the battle scenes. They were not gory or disgusting and yet they had a real feel them.Despite all of the great scenes and dialogue, the ending might have actually been my favorite part. This author handled the ending with a realistic and touching scene of the MC looking back at what she had been through and then wondering how she was going to continue her life. Many Fantasy novels skip over this part, and I love that this one did not. I'm very excited to read the second book in this series!The only reason I didn't give this 5 stars was becomes of some mistakes in sentence structure, punctuation, etc. But it really wasn't super bad and I honestly didn't mind that much. This story was so touching and inspiring that these minor mistakes are easy to ignore.I strongly recommend this book to anyone who likes to read! You don't have to be Christian to enjoy this novel...you just have to have a love for good stories." - HANNAH HEATH, AUTHOR
"Destined to be the next Champion of Septily, Clara isn't certain she's ready for it. She's young and hasn't received the sword of a master swordswoman yet. The evil Sisterhood has gotten its claws into Septily and is about to render it to pieces. With the help of her mentors and friends, she must find the courage to fight in battle. Clara has to have faith in her Lord and herself even when darkness falls over her world.
A wonderful start to the Christian fantasy series, the Champion Trilogy. The worldbuilding is incredible. I love the peeks at the history and the inner workings of the council. There are lovely details about the land and the people, and creatures that are beautiful and horrific. I'm a fan of the people of Aerland and their griffins. I would love to be chosen by griffin to become its partner!Clara is an admirable character with her struggles of inadequacy and faith. Though at times she seems wise for her age, she is portrayed realistically as a young woman with a grand destiny thrust upon her. My favorite character other than the griffins is Stelia. I'd love to learn more about her and his past. As for Kalidess, she is a villain you can thoroughly loathe." - CHRISTINE RAINS, AUTHOR