Interview with Cathrina Constantine for the Marly in Pieces Book Release! 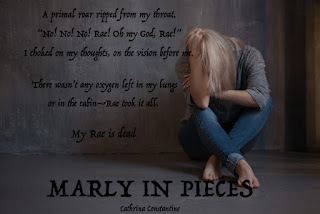 Thanks for joining me and Cathrina Constantine for this interview!
My parts are in bold and Cathrina's answers are in plain font.

Here's a tiny piece of my review of MARLY IN PIECES:
"I love the way the story is written in pieces, past and present, picked up and placed together like stained glass."

1. What prompted you to write the story in a mix of past and present scenes?

Since I decided to begin Marly In Pieces with Rae's death, I felt the need to go back in time to tell Marly and Rae's story. The idea came to me after writing the first couple of chapters. I wasn't positive as to how the story would be accepted or how it would come together.

2. Did you write the past scenes first, then the present day scenes, then mix them up? Or, did you move back and forth between past and present while drafting? I'm just curious, because I found it so compelling and I thought I might like to try it as an author.

Actually, I went back and forth between past and present chapters. Though, I have to admit, toward the end I got confused. Quite a few times I had to rework through the past and present scenes to make it flow in the right direction. And a good editor and proofreader is essential for searching for discrepancies.

3. The opening lines about broken promises really hooked me. What promise do you think is one of the most important promises broken in this book? (This is a question I'm not sure you want to answer because it might spoil the ending.)

The biggest broken promises are, trust and honor. The definition of honor is: adherence to what is right or to a conventional standard of conduct. Also, loyalty plays a major role before Rae's death and after...

4. Broken trust is a central theme in this novel, affecting many of the relationships. At what point, did you see this theme emerging, or did you plan it all along?

I did not plan this type of theme, I believe my characters planned it all on their own....LOL.

5. I was impressed by the number of clues and red herrings present in the novel, keeping me guessing about the identity of the killer until the very end. Did you plan those out beforehand, plan some and add some later, or write them in as you went?

I'm glad to hear my story kept you guessing! I had hoped the developing characters would present themselves as possible suspects. When editing and revising, I had added and planned on creating several red herrings. I changed the ending more than once because my characters were all vying for being named as Rae's killer....


Bonus: At the end, I imagined a new life for Marly. Do you think you'll write another book for her?

As I picture it, after healing from the trauma, Marly will have a new life. As of yet, I don't have a new story idea for Marly, but never say never.... 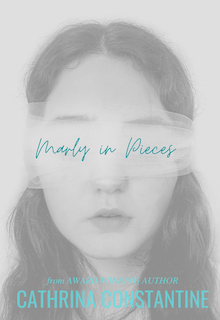 Marly refuses to believe her friend, Rae, committed suicide. Even though her wrists were slit, Marly knows her beautiful, vibrant bestie would never do that.

Even though the two had drifted apart, Marly and Rae made a blood promise long ago. Even in death, Marly intends to honor that vow.

Determined to find Rae’s killer, Marly faces a long list of potential suspects. It seems everyone has secrets or lies that they are covering up... including the boy she loves. Can Marly uncover the murderer’s identity before she becomes the next victim?

My short review:
5/5 Stars
I love the way the story is told in pieces, past and present, picked up and placed together like stained glass. This novel is a tightly woven, character-driven thriller. The character development of Marly and the whole cast of characters is done well, although I wondered at Marly’s decision to throw her life together with Rae’s when their friendship started. As the novel continued, I understood her decision as part of the way she developed in character. The ramping up of tension through the pieces of past and present work really well, and included just the right number of clues left as bread crumbs. The end contains a satisfying conclusion to the mystery of the events in the novel, bringing all the pieces together in a whole.

Congrats to Cathrina - it sounds like a very original way to tell the story. I'm fascinated that the killer changed - I would have thought that would be the one constant factor!

Thank you Tyrean for having me on your blog today!!! And thank you for a fabulous review! I am so glad you liked Marly In Pieces!!

Annalisa - yes, it was interesting to read!

Cathrina - Congratulations on writing such a great book!