Against All Odds Blog Tour: 7 Books to Understand Your Character’s Psychology

7 Books to Understand Your Character’s Psychology
By Jacqui Murray

An efriend writer originally published this as a guest post on their blog to help me launch Against All Odds August 2020. In case you missed it there, here are my anecdotal thoughts on how to add drama to your story:
***
Characters have to be believable. If not, readers put your book down. If your character is a mathematician, he has to think like one, act like one, dress like one. It's not enough to tell us he works for the NSA analyzing data. You have to give him the quirks that make us believe this guy could save the world with his cerebellum.
If you're not that guy, how do you convince readers? Traditional wisdom says two things:
Those are good--especially for your main characters. In fact, you probably can't create a protagonist and antagonist without interviewing those who have walked in their footsteps. But what about the dozens of other characters who wander through a scene, playing bit but important parts in your plot? Here are some great books that will allow you to color them with a consistent brush:
If you have favorite books on this subject, share with us. I'd love to hear about them!
#amwriting #IndieAuthor

Jacqui Murray is the author of the popular Building a Midshipman

, the story of her daughter’s journey from high school to United States Naval Academy, the Rowe-Delamagente thrillers, and the Man vs. Nature saga. She is also the author/editor of over a hundred books on integrating tech into education, adjunct professor of technology in education, blog webmaster, an Amazon Vine Voice,  a columnist for NEA Today, and a freelance journalist on tech ed topics. Look for her next prehistoric fiction, Laws of Nature, Winter 2021. You can find her tech ed books at her publisher’s website, Structured Learning
Amazon Author Page:        https://www.amazon.com/Jacqui-Murray/e/B002E78CQQ/ 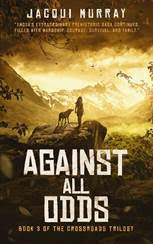 A million years of evolution made Xhosa tough but was it enough? She and her People finally reach their destination—a glorious land of tall grasses, few predators, and an abundance that seems limitless, but an enemy greater than any they have met so far threatens to end their dreams. If Xhosa can’t stop this one, she and her People must again flee.

The Crossroads trilogy is set 850,000 years ago, a time in prehistory when man populated most of Eurasia. He was a violent species, fully capable of addressing the many hardships that threatened his survival except for one: future man, a smarter version of himself, one destined to obliterate all those who came before.

From prehistoric fiction author Jacqui Murray comes the unforgettable saga of a courageous woman who questions assumptions, searches for truth, and does what she must despite daunting opposition. Read the final chapter of her search for freedom, safety, and a new home.

That's a great list of books to help with characters. Thought his wife was a hat? That I would need help understanding!

Thank you so much for featuring me, Tyrean. It'll be fun to chat with your community about these books.

@Alex--He could see bits and details but couldn't pull them together into what they were. So his wife began wearing a red hat so he could identify her. One of those brain problems that you never hear about and you would hate to have but it is fodder for interesting fiction.

Thanks for the links. They sound awesome! I have bookmarked this post so I remember to check them out later. Thanks!

I didn't realize mathematicians thought so differently. It must all be in the process of information.

@Natalie These are great books that help me devise unique characters. We are an amazing species!
@Diane--they do! In a good way, of course. I'm so glad we have people who think like that.

Hi Tyrean and Jacqui - what an interesting post ... not one I was expecting to read about ... fascinating - I'll have to read up on some of these books - the library is now open - so I'll be able to order sometime.

I've seen/read about various brain differences ... and certainly noticed it when my mother had her major strokes - very interesting (eg left-sided neglect). Jill Bolte Taylor - who was a brain scientist - had a stroke at 37 that she was able to follow - extraordinary though that may seem ... she couldn't move but knew what was happening and wrote about it. My post has some interesting other aspects - 'Ideas Worth Spreading ... Dreaming Spires' of 24 July 2009. Also see her Wiki page, and TED talks. Thanks for taking me over to my post - some interesting books there - that I should read!

Take care both of you ... and Jacqui - such a great book ... an email is on its way - and I have it here to read. Tyrean - great to see the mathematician teacher ... stay safe - Hilary

The human brain is amazing. Oliver Sachs is the master of discussing those in his books (like The Man Who Thought His Wife Was a Hat--what a fascinating book). I found the one on your blog you referenced (here's the link for other interested readers! https://positiveletters.blogspot.com/2009/07/ideas-worth-spreading-dreaming-spires.html) I think I must read Jill's book. It sounds wonderful.