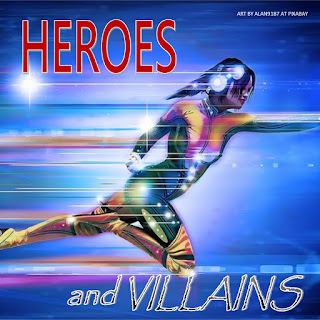 A fascinating subject, Tyrean, and I am already searching my memory for ancient links to those present day hero you mention. One of the main characters in my next book is the Devio, part bad and part good of course. Have done the ‘research’ and should be interesting 👹

Hi Tyrean - sadly most heroes are now lost souls! Well we can still stand by them. I would think 'superman' arose from the dinosaur which rose from feathers and colours as we evolved ... our brains are quite extraordinary and we can invent so many 'things' - enjoy your retelling - cheers Hilary

Even if you don't know all of the details, those will often appear as you write the story.
I've never written a superhero story but I do like to read them.

Hilary - I think all interesting characters get a little lost now and then.

Alex - I think the idea applies to all characters we read and write. Glad you enjoy heroes!

How does Superman fly faster? Is there an origin story for that

Superman's origin story of how he was created has always been an interesting tale.

Powdered Toast - it's been a while since I took the course so I think there is, but I don't remember it.

I didn’t know he started off as a villain. He has the kind of abilities that would be terrifying on the other side. It’s like if Professor X was a bad guy. That would be fun to read, but horrifying for sure.

Excellent post. Thanks for re-sharing. I never really thought about it, but you're right. We come to love these characters, so it's only natural that we want to keep bringing them into our present world. I suppose even characters have to experience growth.

Krystal - yes, it would be.

Ooh, great post. It's always fun to see how comic book characters evolve throughout the decades. (Had no idea Superman was once envisioned as a villain!) Loving all these writing tips, too!